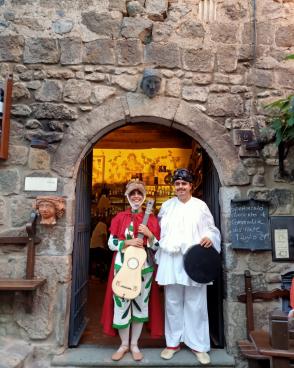 The PernazzaLuongo group is composed by Manuel Pernazza and Alessia Luongo.

The two artists travel with their performances to Italy and all over the world. They have been to Mahòn and Ciutadella in the Balearic Islands, France, Spain and the Netherlands. Alessia Luongo and Manuel Pernazza dedicate their art to the rediscovery of the theatrical and musical universe of Baroque period. Their early music concerts are centered on the mixture of cultured and popular songs to give life to the universe of Sfessania's dances, "I balli di Sfessania" (figures of Jacque Callot).The PernazzaLuongo group has been awarded various prizes and awards. They were interviewed by Tg2 of the Italian national television. "La repubblica", "il corriere della sera", the international magazine the "Mark Dunworth foundation" interviewed them.They appear in a publication of a book by Mondadori-Piemme. The "Geo & Geo" program dedicated an entire episode to the project. The Museum of Civilizations has consecrated them "body and archive of a popular theater". Their art was requested by the Italian actor Carlo Verdone for one of his films.They are required in festivals and travel the world with their shows and concerts.The company boasts the collaboration and artistic consultation of the director and musicologist Maestro Roberto De Simone.

Alessia Luongo specializes in Baroque and Renaissance theater. She studied early music at the conservatory (lute, theorbo, colascione, baroque guitar). She is dedicated to musical projects that she produces as artist. She rediscovers the revolutionary force of the "popular music" by producing her recital on chitarra battente (ancient guitar of South Italy). She rediscovers the anthropology of ancient theater by winning prizes and awards; the Marconi Theater in Rome awards her as "Best Actress" in 2020. She rewrites and arranges pieces and perform them on instruments belonging to the Baroque and Renaissance, bringing her recitals in different festivals and cities: Todi, Naples, Bolsena, Tuscania, Livorno and Viterbo with her concert show for voice and lute.

Manuel Pernazza is the ambassador of the Polichinelle mask.He is a researcher and interpreter of the mask: he rediscovers its customs, traditions and languages. Interpreter of marked refinement and artistic ductility, he will be chosen by the director and musicologist Maestro Roberto De Simone in the show "Mozart and Salieri". He also worked as a director and playwright, rediscovering ancient canvasses in an attempt to carry on the commedia dell'arte.

Watching a show of Alessia and Manuel is a travel in an ancient and new universe at the same time. A unique atmosphere to live in an infinite dream. We will cross a fantastic hemisphere from the modus tarantulae of A. Kircher and G. Sanz to arrive at 17th century anonymous artists from the passacaglia to the villanelle of Kapsberger. From the magic given by the mixture of cultured and popular pieces played on stage by Alessia an incredible performance will come to life: the techniques used will bring back to the seventeenth-century universe of Sfessania puppets and object theater manipulated on stage by Manuel. To refine everything, the wonderful art of acting, "a canovaccio" will suddenly dictate the rhythm of the concert with mimicry, grammelot and expressiveness.